The Department of Anglo-American and German Studies 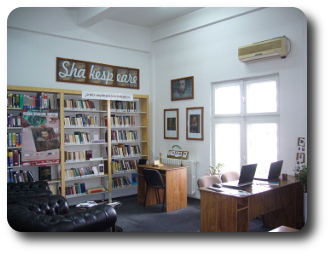 The library stock is highly valuable as it comprises over 200 books on Shakespeare, which were generously donated by Professor Michael Dobson, together with the already existent collections held by the library of the Faculty of Letters and the English Lab.

Shakespeare Corner, housed in the Library of the University of Craiova, is aimed at everyone who is fond of William Shakespeare’s plays and sonnets, being of great use to the students, teaching academics and researchers in the field. It also represents the culmination of the close cooperation between the University of Craiova and “Marin Sorescu” National Theatre in Craiova, the main organizer of the prestigious Craiova International Shakespeare Festival.

Cambridge exams at CN Carol I